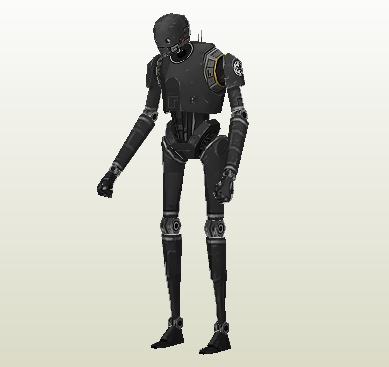 Rogue One - K2SO papercraft
K-2SO (Kay-Too-Ess-Oh), abbreviated K-2 (Kay-Tu or Kaytoo) or Kay, was a KX-series security droid originally created for use in the Galactic Empire's armed forces.
At some point, the droid encountered Captain Cassian Andor, a member of the resistance movement—known as the Rebel Alliance—that sought to overthrow the Empire and restore democracy to the galaxy. Andor was able to reprogram K-2SO to serve the Alliance on the planet Wecacoe. In 0 BBY, K-2SO participated in the Battle of Scarif, where he sacrificed himself so that Andor and Jyn Erso could steal the plans to the Empire's moon-sized battle station, the Death Star.
Instruction: PDO