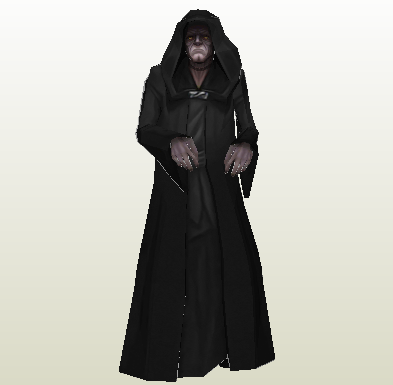 Darth Sidious papercraft
Darth Sidious, born Sheev Palpatine and also known simply as the Emperor, was a human male Dark Lord of the Sith and Emperor of the Galactic Empire, ruling from 19 BBY to 4 ABY. Rising to power in the Galactic Senate as the senator of Naboo, the secretive Sith Lord cultivated two identities, Sidious and Palpatine, using both to further his political career and deceive his way into accomplishing his goal. He orchestrated the fall of the Galactic Republic and the Jedi Order through the Clone Wars, and then established his reign over the galaxy which lasted until his death at the Battle of Endor. However, the dark side of the Force gave rise to powers which allowed the Emperor to return from the grave.
Instruction: PDO