Conomon is a small digimon in the fresh stage, he is very small and newly born of the digi tama, he acquires this shape, his body is like a round mass with a tail and he is brown in color and has 3 horns that differentiate him from his twin brother zerimon, he also has a sub-species that is the evolutionary branch of zerimon, can be born with its twin brother from the same digitame as in the movie; "Digimon from Golden digimental". It is a very special digimon because its evolutionary branch reaches Cherubimon in a mega state, a digimon angel protector and defender of the beast type digimons. This digimon makes an appearance in the frontier digimon at the togemon school when the chosen ones went there. 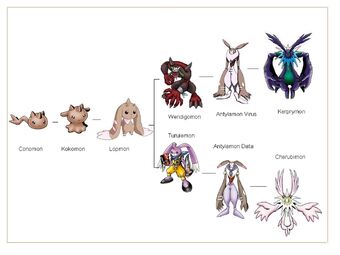 Zerimon is a small digimon in the fresh stage, his body is like a small ball with a three-pointed tail and a horn that protrudes from his head and is highly strong and green, this differentiates him from his twin brother Conomon and this same is his sub-species, he and his twin brother can be born from the same digitama or he can be born only depending on the occasion, he appears as comrade digimon of Henry wong in the digimon tamers series and as comrade of Willis or Wallace in the movie "digimon the golden digimental", he uses his adorability to get what he wants, he is a curious and happy little digimon, he also uses his body to have an advantage in a melee fight and can bite, but he is a calm digimon. 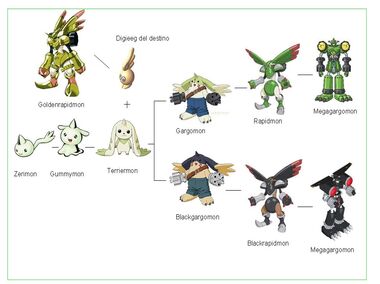