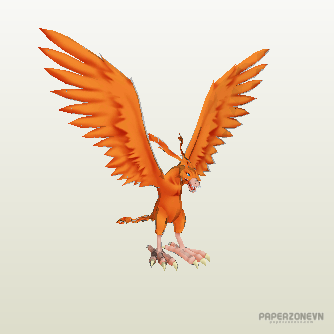 Birdramon is a Giant Bird Digimon. It has an appearance shrouded in blazing flames. Just like Meramon, it is a Digimon that was generated from the Internet's defensive "Firewall". It flaps its gigantic wings, and flies about the sky. Although its personality is in no way combative, it unleashes counterattacks against attacking enemies to a furious degree.Birdramon is a giant bird of fire similar to the mythological phoenix. Its body is wreathed almost entirely in orange flames. The only parts that are not are its mouth with protruding teeth and its two feet, each of which has five talons. It has blue eyes and large wings capable of supporting flight.