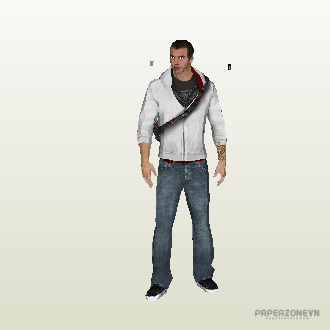 Desmond Miles (1987 – 2012) was a member of the Assassin Order and a descendant of numerous familial lines that had sworn an allegiance to the Assassins, including individuals such as Aquilus, Altaïr Ibn-La'Ahad, Ezio Auditore da Firenze, Edward Kenway, and Ratonhnhaké:ton. He was also the son of the Mentor William Miles and unknowingly the father of Elijah, a young Sage.

By age 16, Desmond became tired of living in hiding and aspired to pursue his own dreams. Using the minimal training of Assassin skills he had obtained from his father, Desmond fled from the Assassin compound he had grown up in and managed to travel from South Dakota to New York City, where he found employment as a bartender in the Bad Weather nightclub.

In September 2012, Desmond was kidnapped and incarcerated by Abstergo Industries, a Templar organization, and forced into a machine called the Animus to relive the genetic memories of his ancestor, Altaïr Ibn-La'Ahad. It was Abstergo's aim to acquire a map that detailed many "Pieces of Eden" spread across the Earth, which Desmond was reluctantly successful in doing. Following this, he managed to escape Abstergo with the help of Lucy Stillman, an undercover Assassin, and joined an Assassin cell in Italy, which consisted of herself, Shaun Hastings and Rebecca Crane. Utilizing an upgraded Animus of Rebecca's construction, Desmond relived the memories of Ezio Auditore da Firenze, in order to improve upon his newly obtained skills.

Eventually, with the knowledge gained from Ezio's memories, Desmond and his fellow Assassins obtained the location of Ezio's Apple of Eden, which was located in a vault underneath the Colosseum. Though successful in obtaining the artifact, Desmond's body was taken over by Juno, a member of the First Civilization, and was made to stab Lucy after Juno revealed her to be a traitor. As a result of the shock, Desmond fell into a coma and was placed in the Black Room, the safe mode of the Animus, in an attempt to stabilize his condition. With help from the virtual construct of Clay Kaczmarek, "Subject 16" of Abstergo's Animus Project, Desmond was able to regain consciousness, and found himself located in the state of New York once more, this time with Rebecca, Shaun, and his father, William.

While in the Grand Temple, Desmond relived the memories of Haytham Kenway and Ratonhnhaké:ton to find the key to the sanctum containing the device needed to prevent a devastating solar flare. He also undertook field missions to retrieve power sources for the Temple, coming into conflict with Daniel Cross. After his father was captured, Desmond rescued him from Abstergo's Roman facility and assassinated Cross and Warren Vidic in the process.

After finding the key, Desmond opened the sanctum but discovered he had been misled. It was made known that the device would save the world, but also unleash Juno, who had been imprisoned because of her hatred for humanity; using the device would also claim Desmond's life. Regardless, Desmond chose to sacrifice himself for humanity's survival, while expressing faith that his fellow Assassins would find a way to stop the new threat.