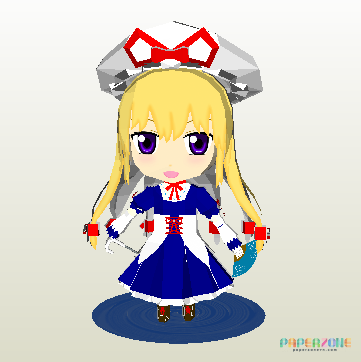 [Touhou] Yukari Yakumo Chibi Papercraft
Yukari first appeared as the phantasm stage boss of Perfect Cherry Blossom with Ran Yakumo serving her as shikigami. Despite being a high-class boss compared to other Extra and Final stage bosses, she's made occasional appearances in later games. She was a playable character in Imperishable Night, partnered with Reimu Hakurei (and supported her in Subterranean Animism), and was playable in the fighting games, but was only a cameo in the background of Hopeless Masquerade. Also, she was also an Extra stage target in Shoot the Bullet and appeared on the Final Day of Impossible Spell Card.