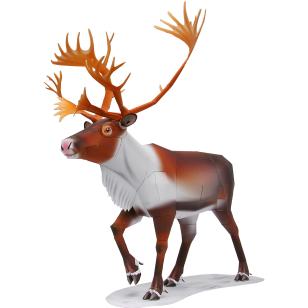 Reindeer Papercraft
The reindeer (Rangifer tarandus), also known as the caribou in North America,[4] is a species of deer with circumpolar distribution, native to Arctic, subarctic, tundra, boreal, and mountainous regions of range of caribou extends from Alaska through the Yukon, the Northwest Territories and Nunavut into the boreal forest and south through the Canadian Rockies.[5] The barren-ground caribou, Porcupine caribou, and Peary caribou live in the tundra, while the shy boreal woodland caribou prefer the boreal forest. The Porcupine caribou and the barren-ground caribou form large herds and undertake lengthy seasonal migrations from birthing grounds to summer and winter feeding grounds in the tundra and taiga. The migrations of Porcupine caribou herds are among the longest of any mammal.[5] Barren-ground caribou are also found in Kitaa in Greenland, but the larger herds are in Alaska, the Northwest Territories, and Nunavut.

Toggle signature
You must log in or register to reply here.