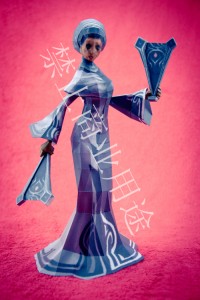 Her Heavenly Wave fan technique is a deadly art of grace and poise, but her truest strength lies in the hearts of those willing to die alongside her. - IreliaSquare Irelia

Even in her youth, Karma exhibited almost superhuman composure. While her peers explored the torrent of emotions that came with adolescence, Karma meditated in the Lotus Gardens. She was convinced that the true path to enlightenment was a journey inward, to a place within the self, overlooked by most. She exuded such inner contentment that she quickly became a go-to mediator and confidante in her village. Her instructors used to say: "That girl can not only weather a storm, but calm it."

Karma did not live extravagantly. Her parents owned a local business selling antiques in the Navori province and they often struggled to provide for themselves, though they did so with cheery optimism. Her most prized possessions were two exquisite Heavenly Wave fans taken from her family's shop.

When Noxian troops invaded southern Ionia, her village was one of the first to fall. The villages who survived the assault were captured by Noxian forces. It was then that Karma found her calling. By exploiting the insecurities of the Noxian commander, she negotiated the safe release of the villages to the northern lands.

She was present at the Placidium, where the Elders had considered surrender until IreliaSquare Irelia's impassioned last stand renewed the Ionians' hope. Karma used this hope to solidify the Elders' commitment to remain defiant against the Noxian onslaught.

For her devotion and charisma, Karma was made the figurehead of the Ionian resistance. She never compromised, and she shared every hardship with her people, even when it came to combat. By tapping into her inner Inner Flame old resilience, she discovered that she could bring great force to bear against her foes on the battlefield. She modified her Heavenly Wave fans into lethal implements, and was tutored by JannaSquare Janna to enhance their effects.

The Noxians called her'The Enlightened One', a nickname she embraced, and one which they would come to dread. She joined the League to represent Ionia in the ultimate political arena.