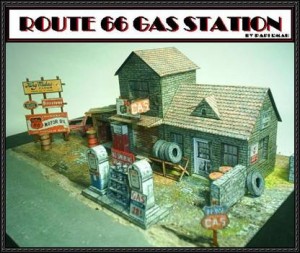 Route 66 Abandoned Gas Station Papercraft
U.S. Route 66 or U.S. Highway 66 (US 66 or Route 66) was one of the original highways in the United States Numbered Highway System. US 66 was established on November 11, 1926, with road signs erected the following year. The highway, which became one of the most famous roads in the United States, originally ran from Chicago, Illinois, through Missouri, Kansas, Oklahoma, Texas, New Mexico, and Arizona before terminating in Santa Monica in Los Angeles County, California, covering a total of 2,448 miles (3,940 km).