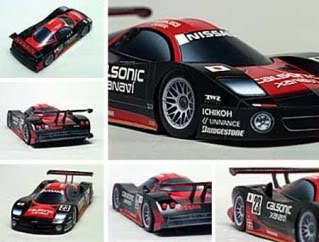 Nissan GT1 Papercraft
The Nissan R390 GT1 was a racing car built in Atsugi, Japan. It was designed primarily to gain a suitable racing entry in the 24 Hours of Le Mans in 1997 and 1998. It was built to race under the grand touring style rules, requiring a homologated road version to be built. Therefore, the R390 was built originally as road car, then a racing version of the car was developed afterwards. Only one R390 road car was ever built and is stored at Nissan's Zama facility, although one of the race cars was later modified for road use. The road car was claimed to be capable of attaining a top speed of 354 km/h (220 mph). However, this claim has never been proven.
paper size: A4
sacale:1/10