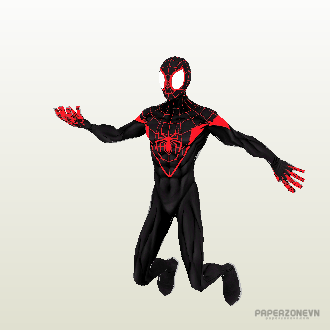 Marvel's Spider-Man: Miles Morales is a 2020 action-adventure game developed by Insomniac Games and published by Sony Interactive Entertainment for the PlayStation 4 and PlayStation 5. Based on the Marvel Comics superhero Miles Morales, it is inspired by both the character's decade-long comic book mythology and the 2018 animated film Spider-Man: Into the Spider-Verse, which helped to popularize him. The game is a spin-off of Marvel's Spider-Man, and depicts Miles' struggle to balance the duties of his civilian persona and Spider-Man when his new home, Harlem, is threatened by a war between the Roxxon Energy Corporation and the Tinkerer's high-tech criminal army, the Underground.

Gameplay is presented from the third-person perspective with a primary focus on Miles' traversal and combat abilities. Miles can freely move around New York City, interacting with characters, undertaking missions, and unlocking new gadgets and suits by progressing through the main story or completing tasks. Outside the story, the player is able to complete side missions to unlock additional content and collectible items. Combat focuses on chaining attacks together and using the environment and webs to incapacitate numerous foes while avoiding damage.

First announced at the PlayStation 5 reveal event in June 2020, the game was released as a launch title for the new console on November 12, 2020, in North America and Australia, and November 19 worldwide. A PlayStation 4 version was released the same day, lacking some of the advanced features of its next-gen counterpart such as ray-tracing or a 60 FPS performance mode, because of the console's technical limitations. A remastered version of Marvel's Spider-Man for the PlayStation 5 is included in the "Ultimate Edition" of Miles Morales. The game received praise for its combat, narrative, content, and technical improvements of the PS5 version. As of July 2021, the game has sold over 6.5 million copies.