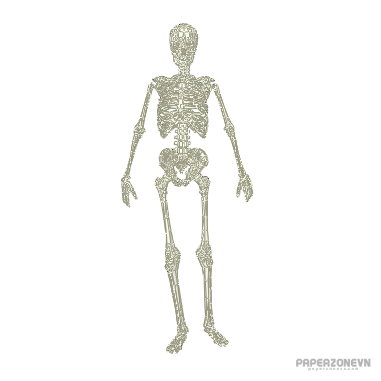 ​
The human skeleton is the internal framework of the human body. It is composed of around 270 bones at birth – this total decreases to around 206 bones by adulthood after some bones get fused together. The bone mass in the skeleton makes up about 14% of the total body weight (ca. 10–11 kg for an average person) and reaches maximum density around age 21. The human skeleton can be divided into the axial skeleton and the appendicular skeleton. The axial skeleton is formed by the vertebral column, the rib cage, the skull and other associated bones. The appendicular skeleton, which is attached to the axial skeleton, is formed by the shoulder girdle, the pelvic girdle and the bones of the upper and lower limbs.

The human skeleton is not as sexually dimorphic as that of many other primate species, but subtle differences between sexes in the morphology of the skull, dentition, long bones, and pelvis exist. In general, female skeletal elements tend to be smaller and less robust than corresponding male elements within a given population. The human female pelvis is also different from that of males in order to facilitate childbirth. Unlike most primates, human males do not have penile bones.

Please in PDF format . I cannot get the template

Devraj said:
Please in PDF format . I cannot get the template
Click to expand...

you can read this article to know how to convert PDF files: https://paperzonevn.com/threads/kin...t-va-convert-tu-pdo-sang-pdf-bang-foxit.3046/
You must log in or register to reply here.