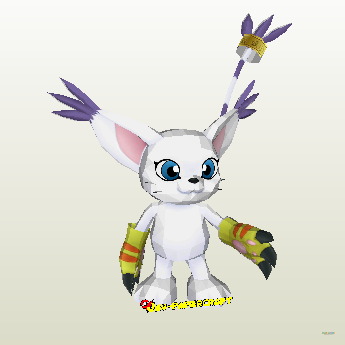 Gatomon is an Animal Digimon. It has a very healthy curiosity, so it loves pranks. Although its body is small, it is a precious Holy-species Digimon, and its appearance does not match the true strength it possesses. It wears a Holy Ring on its tail, but if it is lost, its power is decreased and it can no longer exhibit its original power. In order to defend itself, it wears long claws copied from SaberLeomon's data. Even though Gatomon is not a descendant of an ancient species, it became able to Armor digivolve by awakening the special abilities that slept within its composition data.