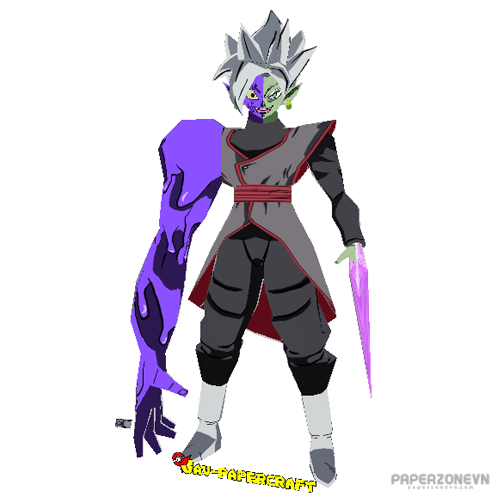 With his fused body being an unbalanced mix, while his semi-immortal body struggles to properly heal from damage, his body's damaged sections mutate into a purple and slimy substance, which happened to the entire right half of his body. It also caused the sclera of his right eye to turn yellow and his pupil to turn purplish-red. When Fused Zamasu used Light of Divine Justice, it caused his right arm to grow massive.

Vegeta joins his son and the two launch a combined Galick Gun, which pushes Zamasu's attack back to him, but causes little to no damage at all. Frustrated at their resistance, Zamasu attempts to attack Trunks but attacks Vegeta instead when he stepped in front of the attack. Afterward, Goku approaches Zamasu and fires his God Kamehameha, which clashes with Zamasu's Holy Wrath.