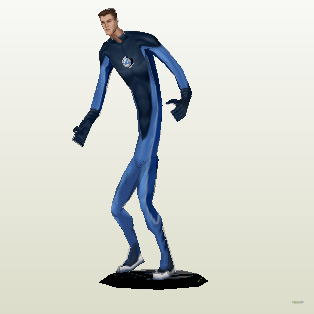 Mister Fantastic (Reed Richards) is a fictional superhero appearing in American comic books published by Marvel Comics. The character is a founding member of the Fantastic Four. Richards possesses a mastery of mechanical, aerospace and electrical engineering, chemistry, all levels of physics, and human and alien biology. BusinessWeek listed Mister Fantastic as one of the top ten most intelligent fictional characters in American comics. He is the inventor of the spacecraft that was bombarded by cosmic radiation on its maiden voyage, granting the Fantastic Four their powers. Richards gained the ability to stretch his body into any shape he desires.

Mister Fantastic acts as the leader and father figure of the Fantastic Four, and although his cosmic ray powers are primarily stretching abilities, his presence on the team is heavily defined by his scientific acumen, as he is officially acknowledged as the smartest man in the Marvel Universe. This is particularly a point of tragedy in regards to his best friend, Ben Grimm, who he has constantly tried to turn back into his human form but typically remains a large, rocky creature called the Thing. He is the loving husband of Susan Storm, father of Franklin Richards and Valeria Richards, and mentor of his brother-in-law, Johnny Storm.