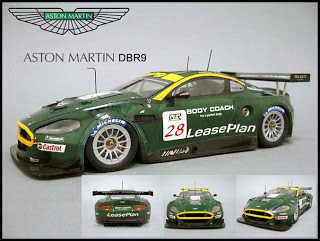 The Aston Martin DBR9 is a racing car built by Aston Martin Racing, debuting in 2005 and racing actively in international sportscar racing until the end of GT1 category in 2011. The name DBR9 is derived from the original 24 Hours of Le Mans-winning DBR1 car, named for then-owner David Brown, which not only won the 24 Hour race in 1959 but also the World Sportscar title. The car is most famous for taking two LMGT1 class wins at Le Mans 24 Hours (2007 and 2008) by the Aston Martin Racing factory team.

Last edited by a moderator: 9/13/22
Reactions: popwoo
You must log in or register to reply here.